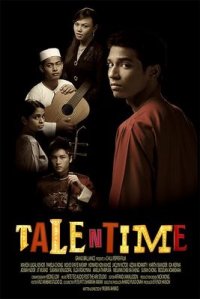 I decided to go watch Tale-n-Time by Yasmin Ahmad, today. Since the cinemas were showing a limited re-screening of the film due to her recent passing, I thought that I should take the opportunity to catch it on the big screen. I fully intend to purchase the DVD at some point to complete my collection. So, I walked up to the box-office and got a ticket for the film. I was rather surprised that there were very few people actually catching the film. I pretty much got to sit wherever I wanted to.

Anyway, Yasmin outdid herself this time. Her films have always been decidedly multi-lingual – because that is just the way things are in Malaysia. In this particular film, there was English, Malay, Tamil, Cantonese, Mandarin and Sign. Yes, that’s right, she even got some of her actors to sign in this one as one of the main characters was ‘speech and hearing impaired’ and did not speak a single line in the entire film.

The message this time has always been the same as the message last time – addressing very key issues pertaining to race relations in Malaysia. Again, there was one pretty pointless scene, which solely existed in order to highlight the issue of race in educational scholarships in Malaysia. Again, cross race and religion love played an important role in the film again. However, she always addresses these issues in a very artistic manner, but it hits you in the face nonetheless.

By the end of the film, I was brought to tears again. Although I found her film very entertaining and funny at times – it whispers to my heart of all the things that most of us Malaysians would have gone through growing up – it still managed to tug at the heart-strings. For that, I have to salute her. She had a clear vision of what it is to be Malaysian and was daring and bold enough to put it on screen. I hope that the people who watch it won’t just dismiss it as a pipe-dream as it is something that we can all truly benefit from.

I should just mention that I loved the way she started and ended the film. I just laughed so loud in the first minute of the film, when I saw them taking an exam. It was so typical of things in school. In fact, her choice of school – Anderson, Ipoh – brought back a lot of memories for me too. I did not attend Anderson but I was in another colonial school as well. These schools were all designed and built in the same way – the windows, doors, hallways, stair-cases and courtyards all brought back sweet memories. Of course, her choice of location – Ipoh – brought back a lot of memories too.

PS: There are some nice tunes in it too! The OST should be good.

One thought on “Dear Talentime”