This coming 13th General Election (GE13) has been dubbed as the mother of all elections, in Malaysia, for good reason. Whatever happens in the end, I wish the best to all those who are participating in the elections. Personally, I decided that I ought to savour this elections as best I can.

So, first thing I did was wake up at an ungodly hour on nomination day, to travel to the nomination centre for P102 – Serdang. The nomination centre was at the MPKJ Stadium. I was going there to support the candidate who was running there. I was also interested to take part in the atmosphere. 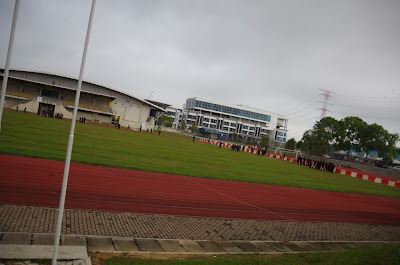 I arrived pretty early – before the crowd arrived. I easily got a parking nearby and proceeded to the stadium. There were small pockets of people milling about and the police were busy executing drills in the stadium compound. Otherwise, everything was real quiet.

Then, the supporters started to arrive. The BN supporters basically invaded the two mamak stalls serving breakfast in the area. Everyone was busy getting a bite before the activity ahead. I’m sure that everyone woke up at ungodly hours too. 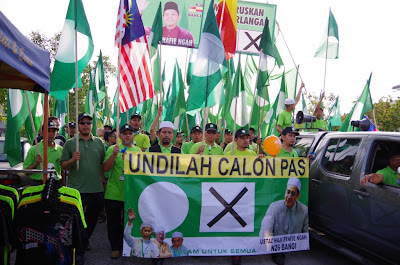 I got there just in time to catch the main procession of supporters coming it. There were huge numbers from PAS who came. I attribute this to the fact that the stadium was located near Bangi, a traditional PAS dominant area. Then, came the DAP procession with my friend in tow. 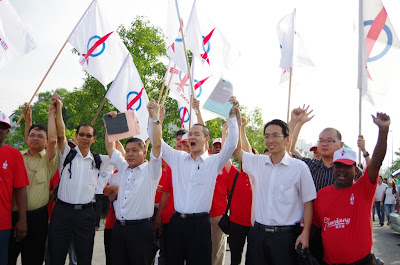 The atmosphere on the PR side of things was a rather interesting one. For the first time ever, I saw clear signs that both DAP and PAS supporters were truly supportive of each other. Everyone knew about the potential plight that DAP candidates may be forced to run under the moon symbol. So, everyone was supportive. 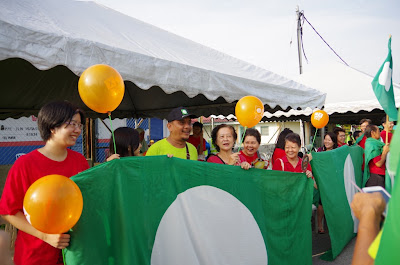 In fact, things have certainly changed. I saw old Chinese men and women carrying the PAS flag and even cloaking themselves in the flag. This would have been unimaginable, a mere 10 years ago. PAS’s Islamist image has been its bane and a source of tension with the non-Muslim community in Malaysia in the past.

However, things have certainly changed today.

Things continued to stay very calm through most of the nomination period. Supporters from both sides kept to themselves and ran their own little activities. Things only got really boisterous when the candidates were announced and when it was known that DAP would be allowed to run under the rocket symbol.

The unforgiving sun was beginning to get the better of me. I stayed on until all the candidates names were announced. Then, I bade my friends farewell and went off.