After long last, I have finally managed to hire a full-time staff at AESTE. We did all the statutory registrations today and my company has now got an official account number. This is a milestone as it indicates that things are getting serious.

I have previously relied on an army of interns to get things done. I had a lot of difficulty getting full-time staff even though I have been trying to hire for more than a year. Work still needed to get done and therefore, I relied on interns.

Now, I hope that the new staff that I have would be able to contribute positively to AESTE’s growth. I think that he can be trained to do a lot of the work that is needed. In fact, I am already helping him chart his professional growth.

I’ve already advised him to register himself with the Board of Engineers Malaysia (BEM) as soon as possible and to target to be a C.Eng or P.Eng in about 5-years time. I think that this is essential even for electronics engineers, as our local engineering services becomes liberalised.

So, I hope that things will continue to progress well for AESTE in the coming months.

I’ve recently been involved with some work on programme accreditation at a local university. While the exercises were extremely useful in the sense that I learned something about the accreditation processes, I have also learned that there are some problems with it.

However, I do realise that trying to accredit the content would probably be 10x more expensive than just looking at the processes involved but maybe it would be worth it to spend that extra effort to thoroughly accredit a programme and then give them a longer-term accreditation instead.

Unfortunately, I also realise that this is Malaysia and that it is easier to blindly follow processes and procedures to get things done than to do things correctly. But we should not let something like this make us lose sight of the ultimate aim – to deliver quality education both in terms of content and process.

We need to simplify the accreditation mechanism to answer a simple question – whether our graduates are able to contribute to society. It doesn’t matter if they come from a 5* university with full accreditation if they are unable to do the work.

I’m not going to tell them this but I think that my students have been great, this semester.

I got to teach a class of 74 final year students and they were awfully good sports. My style of teaching is like play and it’ll only work if the students are active participants, which they were. Nobody fell asleep through the 42 hours of lectures that we had together.

There were several claims of bloody murder and cries of pain and terror. However, all the inflicted pain was always done with their best interests at heart. Although there were a few misses here and there, they were mostly able to hit the mark.

Some of them are graduating soon and their bags are already packed. I think that I will honestly miss some of the oddballs. It is fun to work with final year students when they are good enough to knead with. I hope that I did a small part in shaping their futures positively.

I keep using the word fun because it has honestly been – FUN!

I would like to wish them the best in their future endeavours and I hope that they will recall my oft uttered remark – ‘it depends’ – when someone asks them a really tough question for, in engineering, nothing is precise nor certain and everything is a shade of glee.

Today, my students sat for the final paper of their examinations – my paper! After about 2 hours, one students turned up at my office to complain to me about killing them. He claimed that more than half the class will fail.

Again, I am glad that I am pushing the students to their limits and beyond. That’s my job as an educator.

However, I have yet to actually mark the papers. I intend to start marking them tonight and over the weekend. I hope that the students will beat my expectations.

Personally, I have no interest in failing students. However, I feel that it is my responsibility to push them and to show them a very important point, that there are no straight-forward answers to engineering problems and they all need to think their way through the problems.

I would like to wish my students good luck, and have a good holiday!

The students actually did better than expected. Although there will definitely be a number of failures, I think that most of them will get through just fine. Quite a number of them did surprisingly well.

Listen to one of the interns at AESTE talk a little about his internship experience there.

An internship at AESTE is guaranteed to push you to discover strange new things about yourself.

Read what other interns learned through their experiences here.

I just had a student accuse me of bloody murder and trying to kill them all, in an email. I must be doing something right at the university.

The students are just thoroughly not prepared for a teaching style like mine – where I actually treat them like adults. I give them the open space and freedom to explore and do whatever that they think is right.

For one, although I am teaching engineering I ask some fairly open-ended and argumentative questions in the tests and exams. In the mid-term test, I asked them to classify and justify whether an FM radio was a digital, analogue or mixed system. The default answer given by most engineers would be – analogue. However, some students answered – mixed – as large parts of modern FM radios are digital. I accept both answers as valid but only if it was justified.

For another, in their semester project, I asked them to design a small part of a digital system – either the transmitter or receiver portion of an RS232 or SPI module. I even pointed them towards the largest code repository in the world – OpenCores – encouraging them to use the many examples there. I did not even specify how they should implement it nor how they should demonstrate it as I left it to them to decide for themselves based on their skills and capabilities.

If they are really good, and can successfully implement it in hardware, good for them. If not, they can always demo it to me in software. Or even worse, if they fail to implement it completely, they can just show me what they’ve got in software. Heck, I even limited their project reports to under 6-pages!

I have even shown the previous lecturer the stuff that I get them to do in order to get some feedback on my teaching work and we both agree that the work is straight-forward and simple. I’m not expecting any of them to do rocket-science.

Honestly, now I get accused of bloody murder.

Some of these kids have no idea how much I am actually trying to help them learn and think. Well, I guess that teaching is a noble profession for a reason – it’s a thankless job. All I hope is that these kids will think of me fondly when they start to face some real problems in the future. 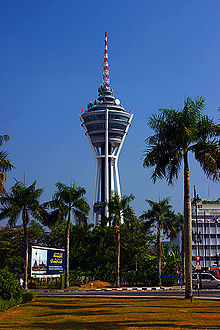 Yesterday, I was asked to attend a meeting in Alor Setar, Kedah. I have never been up here before. So, I bought myself a new Garmin GPS yesterday and I drove up first thing this morning, from KL.

I noticed a few things during the journey up but I think that I have found the secret to driving long-distance without fatigue – context switching. Normally, I would be quite tired just driving up to Ipoh. However, this time around, I did not feel any tiredness until I had actually passed Penang and was approaching Alor Setar. I am also not fatigued and am able to write this blog entry at 10.30pm.

I am really glad that I bought a GPS yesterday as I would have gotten lost otherwise.. I only bought it because I will be making a long working trip up to both Kedah and Penang this week and I am not familiar with the roads at either place. I wonder how people got about before the invention of the GPS.

During our evening break, I decided to go take a look around central Alor Setar (where I am staying) and I found that it reminded me of Kajang in the early 90s. In fact, they even have the same departmental store that we had in Kajang two decades ago!

While I do not buy pirated discs, one thing that caught my eye was RM10 pirated blue-ray discs. These things cost about RM25 back in KL and I am surprised that it is so much cheaper up north.

Sybreon Ones Nought
Create a free website or blog at WordPress.com.