I HAVE been dabbling a little in online dating recently but unlike most people who dabble, I did some quantitative research on it out of curiosity. Blame it on the academic in me.

I even wrote an academic paper on it for part of my law degree. The actual focus of my research paper was on the effectiveness of techniques for detecting fake profiles.

I wonder what the lecturer thinks of the results. Anyway, I thought that I’d share some findings here.

If you browse around, you will find a lot of research on online dating. However, such research is largely focused outside of Malaysia while my data collection was focused purely on Malaysian, specifically Klang Valley, profiles.

Also, I limited my data collection to OKCupid (OKC) users only.

If you search further, you will find a lot of research done on OKC by its own users. There is even an interesting TED talk on how people can work the system to optimise their chance of success. OKC itself has admitted conducting experiments on its own users too.

My research was neither as big nor as ambitious, but I learned some interesting things about Malaysian OKC users nonetheless.

As usual, I started by sizing up the demographics of the pool. I limited my population to users who had used the service within the last month only as I wanted to count the profiles that were relatively active, and discard non-active ones. Otherwise, the numbers would just be too unwieldy.

The graph above shows the distribution of the profiles, segmented into age groups (Umur) and divided by gender (Lelaki = male; Wanita = female).

The shape of the curve itself is probably as most would expect it to be – that is, a lot of people in their 20s and early 30s on the site, and fewer as one gets older. This, of course, assumes that people report their age accurately, which I have found to be true.

Then, things pick up again in the 50s. 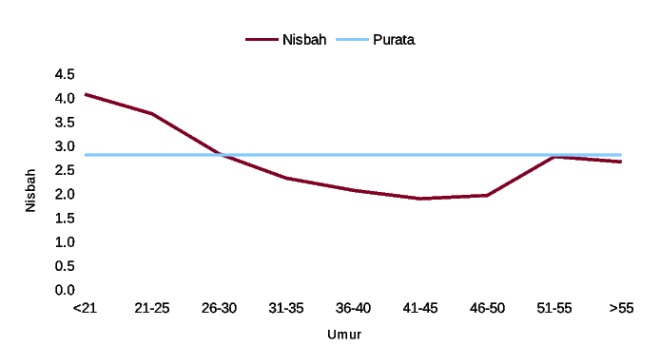 Read what you will into these numbers, but fellows, be warned: The competition is pretty stiff. If you are a woman on OKC, the odds are definitely in your favour. You are definitely going to get hits, but whether the candidates meet your criteria are another matter entirely.

From the conversations that I’ve had with several women who use OKC, the problem that they have is that they generally get inundated with messages and various propositions. So, they need to spend some effort in filtering the hits from the misses. This is actually a good problem to have.

Therefore, if you are a man trying to message a woman on OKC, don’t be surprised if your message gets lost in the pile. You may have already experienced this, but you now know how high the deck is stacked.

So, that initial message needs to catch their attention fast, or you risk your message getting ignored, deleted or blocked.

Now, with regards to the authenticity of the profiles, the results are interesting as well. The results for both genders are fairly similar and so, I’ve combined the results into a single graph. 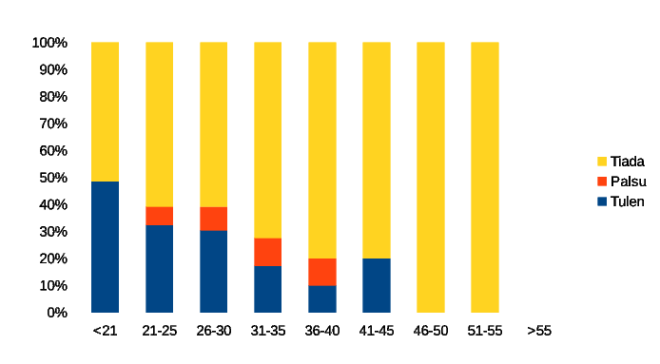 As you can see, fake (palsu) profiles start to pop up in the 20s and 30s as the number of authentic (tulen) ones start to drop.

I think that this graph could also serve as a corollary for the growth of social networking sites. This is probably due to the techniques that I used to verify a profile.

This also means that people need to be careful with the photographs that are posted online as these could be used by others for various purposes. I know of one OKC user who has even resorted to threatening those who do so with a lawsuit, but I don’t know how effective that strategy is.

Finally, the main takeaway from all this is that you cannot really tell if the profiles are fake or not for the vast majority out there. Therefore, one should always exercise caution when dealing with other users of online dating sites.