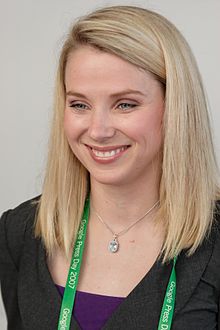 The common thread, she realized, was that each of those decisions had allowed her to surround herself with really smart people and to do something outside of her comfort zone. The same would be true if she went with Google, she figured. The guys she had met there were the smartest people she had ever interviewed with, and she had a sense that she would learn more from failing with them than by succeeding someplace else.

On May 1, she declined 11 job offers and kept the Google and McKinsey ones alive. Six days later, she verbally accepted Google’s offer, signing with the company on the 12th—12 being her lucky number.

On graduation day, Mayer was surprised to see Page and Brin there to cheer her on. They were wearing shorts and traveling on inline skates. As they were talking with Mayer and her parents, Page suddenly said, “Hey, I think I may have graduated today. I should go and see.” He skated away, returning with the master’s diploma he hadn’t yet bothered to pick up. Mayer’s parents took in the spectacle with a bit of trepidation. They wanted to believe their daughter was making the right decision, but they couldn’t help wondering about the wisdom of her signing with a company that had no revenue, no clear strategy for revenue, and leaders who skated to their graduation.

From the adventures of Marissa.