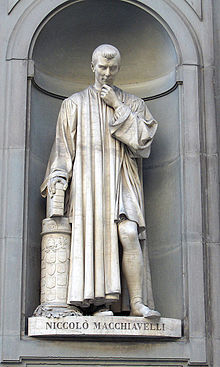 I just read this post by our non-fugitive blogger, RPK, about how the emerging – “Anything But UMNO” – trend is rather worrying. I couldn’t agree more. Niccolo Machiavelli is largely credited as the person who came up with the notion that the ends justifies the means. Unfortunately, I am not one of those people who believe in that. To me, the means are far more important than the ends, which is a problem in so many ways.

While I think that our country needs a good government, even possibly an alternative government, I do not believe that we need to do whatever necessary to throw BN out. While our BN government has raped Our Country and defiled Our Constitution in so many ways, there are also so many things that we have today, which the BN government should be credited for. As for the opposition, they are a big joke at the moment. I hope that they will be able to get their act together and to put on a positive challenge for the future.

I don’t know about other people, but I do not want to trade one government for another similar one. If there is going to be a change, let there be some real change. After the last GE, I actually believed that the best way to bring about positive change for Malaysia was for the opposition to work with the BN government in a unity government. Let me quote myself:

We have a new beginning in Malaysia. News is also beginning to filter in on the reactions by various parties. I thought that I’d put down what I think are some good ideas for the Opposition 2.0 to try to think about. I’m hoping that the opposition will not disappoint but I have a sinking feeling that they will.

Local Elections
I am hoping that the local councilors in the opposition states will now be elected democratically instead of being appointed. It should not be too difficult to implement a form of local elections for people like the mayor too.

Shadow Cabinet
The rakyat have been asking for this for ages. They have no excuses now. The opposition has enough numbers in parliament to form an effective shadow cabinet and create a real check and balance for the ruling government.

Real Proposals
Now, the opposition can no longer make random promises as they have to deliver on the promises. If they want to get rid of the NEP, please give a solid proposal on what to replace it with. Meritocracy and fairness are not proposals.

Racial Politics
Personally, I find it kind of disappointing that the opposition are playing the same racial game that nobody is interested in anymore. Multi-racial politics is still racial politics. They have a chance of changing the political landscape totally, but they seem to be oblivious of it.

Work Together
Instead of cultivating an us vs them mentality, the opposition should invite participation from the ruling government. In fact, the government should do that too, by inviting opposition MPs into the cabinet. People should be selected based on experience/skills, and not who they kowtow to.

Let’s all hope that our dreams don’t turn into nightmares. Let’s not fall back into the same rut that we’ve just managed to dig ourselves out of.

Sigh. My dream will not be shattered.