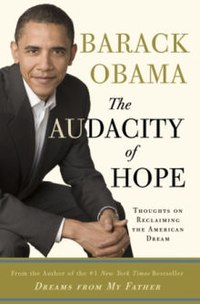 I just finished the book today and have to say that Obama is better at giving speeches than he is at writing. However, that does not diminish the effect that the book had on me. It drove me to tears towards the end because it mirrored many of my own hopes, feelings and thoughts. Even now, writing this entry is a little heady.

Obama has changed somewhat, over the course of his Presidential election – for obvious reasons. However, the gist of his message has not wavered, since his student days and early life. He comes across as someone who has a great sense of social justice and the ability to differentiate right from wrong without policing anyone’s morality or values.

That is not something easy to accomplish.

There is no way that we can ever steer ourselves out of our current down-spiraling trajectory unless we all possess the audacity of hope. While I don’t think that an Obama will be able to solve all of America’s problems, that is not his role. His is to gently nudge his people across the precipice so that future generations have a strong platform and clear vision to solve their own problems.

What we need in Malaysia is just someone like that – a leader who can convince enough people to trust in ourselves, trust the future, and not place our trust in him. For the moment, I am still awaiting such a leader to appear. Obama went from convention gate-crasher to President in 8 years. Maybe such a person does exist in our own future and is currently still gate-crashing political rallies.

Smile. Hope is a potent drug.

In the end, that’s what this election is about. Do we participate in a politics of cynicism or a politics of hope? John Kerry calls on us to hope. John Edwards calls on us to hope. I’m not talking about blind optimism here — the almost willful ignorance that thinks unemployment will go away if we just don’t talk about it, or the health care crisis will solve itself if we just ignore it. No, I’m talking about something more substantial.