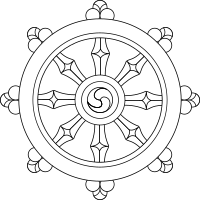 A random thought went through my head today and I asked myself if I found religion or if religion found me. Some people are born into it, some are converted into it while some find it themselves. Since I was not born a Buddhist, I can reject the first possibility, which left the other two possibilities.

After some mulling, I came to the conclusion that I found Buddhism, even if I was first introduced to it as a child by my parents. The reason that I came to this conclusion is because of my character. I was born the way that I am. My kind of personality can never accept any sort of faith-based religion. I was born as a man of science, which explains why I took to this subject so easily as a child. Any friend of mine can tell you that I am a man of logic and rationale.

Therefore, I would have to say that my religion is actually science. However, of the many major religions in the world, the only one that comes close to the logic and rationality of science is Buddhism – it does not ask you to believe anything but actively encourages you to constantly question accepted dogma and to strive towards finding the truth.

In that sense – it appeals to the scientific man in me. I do not need to reconcile what I know versus what I believe in – they are both in-line with the other.

The world is a beautiful place.