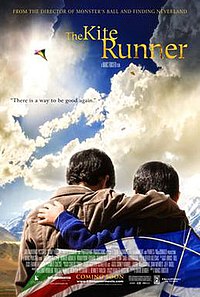 A beautiful story, woven off a tapestry of lost innocence, broken promises and opportunities denied. Although I got free tickets to watch this film when it first came out, I missed it because I had some other things to do. However, I had always felt that this was a film worth watching and so I bought myself the DVD a couple of weeks ago. Although the story was told almost entirely in a foreign tongue (possibly Pashtun) nothing was missed in the telling.

The acting was not particularly good but it was good enough. I liked the fact that it showed an Afghanistan, a modern Afghanistan, free from the ravages of war just before the Russians invaded. It was just like any other country in the 70s. However, things got really screwed up after that. No matter how bad things already are, they can always get worse. That is my belief. I particularly liked how kites brought everyone together. There was some interesting CGI work done on the kite battles.

Anyway, it is a film worth watching if one has 2 hours of time to spare on something a little different from your normal Hollywood fare.