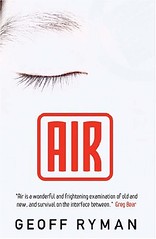 I had just completed my book club reading assignment – Air by Geoff Ryman. It made an interesting read because I had never read anything written like that before. The story itself wasn’t particularly special but I found the writing style quite interesting. The author uses very short sentences and descriptions throughout his book. I do hope that it is his style and he had not been needlessly edited out by his publishing company.

Air is the story of a town’s fashion expert Chung Mae, a smart but illiterate peasant woman in a small village in the fictional country of Karzistan (loosely based on the country of Kazakhstan), and her suddenly leading role in reaction to dramatic, worldwide experiments with a new information technology called Air. Air is information exchange, not unlike the Internet, that occurs in everyone’s brain and is intended to connect the world. After a test of Air is imposed on Mae’s unprepared mountain town, everyone and everything changes, especially Mae who was deeper into Air than any other person. Afterwards, Mae struggles to prepare her people for what is to come while learning all about the world outside her home.

The story itself is grounded in some facts, which is good. I like my fiction to be at least believable to an extent. It was all the more interesting because the book touched on certain issues that I have been considering recently. I particularly liked the fact that the people who lived in the story seemed to be made up of a eclectic mix of various races and religions, all living in constantly tumultuous harmony. In some ways, it reminded me so much of home.

However, I kind of dislike the way that the author made up the names of stuff, just for the sake of naming stuff differently. Like instead of a credit card, the author calls them Clever Cards instead. I ended up spending quite a bit of time distracted by this and trying to figure out what it was that the author actually meant. I could usually find a direct analogy to a real-world word that meant what the author was trying to say. Also, the bastardisation of so many words by spelling them out as they sound phonetically rather than using the actual word was rather distracting as well.

This reminded me of the recent XKCD comic about made-up words: 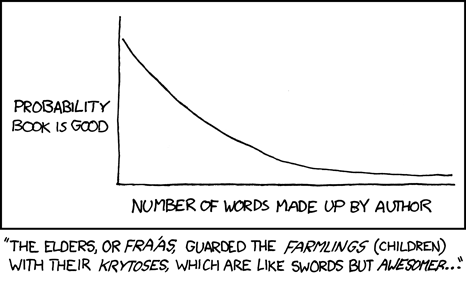 All in all, if Geoff Ryman writes books like this, I don’t think that I will be buying many more of them. He has some nice stories to tell but his style is too distracting for me.