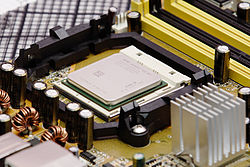 Recently, I have ‘dug’ up a lot of old computers. Then, this evening, I was describing my home network to another geek friend of mine and he asked me, how many computers do I have in my house at this very moment. While trying to list down the machines that I have, I came to realise that I have a lot of them. So, I thought that I’d list them down just for fun, in functional order:

Man, that is a lot of computers. Taking away the broken ones and the microprocessor parts, that’s still 12 working machines in total. The thing is, I plan to buy a couple more in the near future – my NAS and HTPC projects, remember? LOL! 😀

To network them all up, I have a 11b access point and 11g router running at home. I also have eight 11b USB dongles that I use to connect the machines to the home network. In addition, I have many metres of Cat5e cables and half a dozen ethernet cards at home too. The only thing that I’m short of at home is power points.

Maybe I can one day build my own mini-computer museum at home. Maybe I should do it today! I managed to clear out one display-case during my spring cleaning. I could possibly fashion some labels and display boxes out of the other junk that I’ve uncovered. At the very least, I should preserve the microprocessors since that is my field of interest.