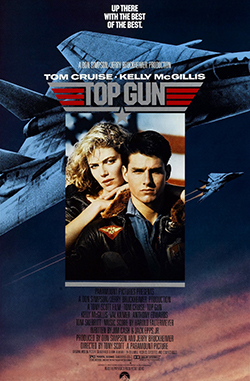 Top Gun has always been on my Top 10 list of greatest films of all time. Even with all the special effects in films today, very few are able to beat this movie. It was also one of the two quintessential films that cemented the career of Tom Cruise.

There are a few things that I like about the film – the dog-fight scenes and the music. The dog-fight scenes were so well shot that nothing even came close to being as adrenaline inducing as this film was, until Pearl Harbour came along.

As for the music, the soundtrack gave birth to many classic songs that are still popular even today. Many of the songs are just as adrenaline pumped as the film itself but there were also a few mellow romantic tunes as well.

I have always been partial towards the F-14 Tomcat. I have had a love affair with it from the very first time I laid eyes on it. I consider its swept wing design an engineering marvel and beauty.

Why the sudden nostalgia with old films, you may ask? Well, I watched it several times last week and I thought that it was still as good today as it was 20 years ago. Top Gun made a distinct impression on an entire generation, mine included.