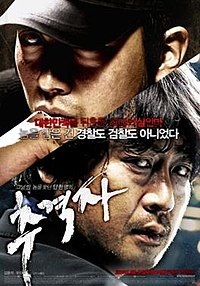 What can I say about this film. It has far exceeded my expectations. I had only bought it because there wasn’t much else left for me to buy. I have purchased a large number of Korean films from the local inventory. Since this film was relatively cheap, I thought that I would give it a try.

This is a seriously good film. It kept me at the edge of my seat, made me cry, and caused me to scream at one point. Instead of writing my own, I thought that I’d just quote one from the Internet:

Ex-cop pimp Jung-ho is irritated because his girls keep disappearing without clearing their debts. One night, he gets a call from a customer and sends Mi-jin. Jung-ho realizes the phone number of the customer matches that of the calls the missing girls got last. As something smells fishy, he searches for her. During his search, Jung-ho dents a car in the alley. When Jung-ho spots blood splattered on the driver’s shirt, he senses the man, Young-min, is the suspect. After an intense chase, Jung-ho catches Young-min. But because of Jung-ho’s pretense as a cop, they are both taken to the police station. At the station, the man bluntly confesses he has killed the missing women, and the last girl, Mi-jin, may still be alive. As the whole police force is obsessed with a random search for corpses, Jung-ho is the only one who believes Mi-jin is still alive. With only 12 hours left to detain the serial killer without a warrant, Jung-ho’s hunt begins, searching for Mi-jin entrapped in a place nobody knows.

All I can say is that this is one hell of a show. After watching so many Korean films, I’m starting to get a sense of their style of cinematography and story telling. This film is classic Korean with one heck of a story. I’d watch it again just to be able to scream out loud again.