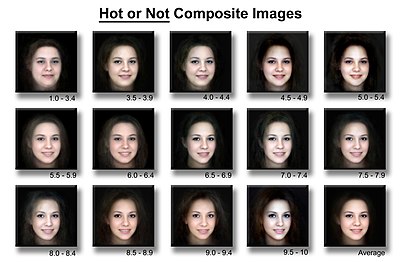 According to this article, it seems that some boffins in Israel have come up with a mathematical algorithm to determine just how beautiful a woman is. The core idea behind their algorithm is the Golden Ratio (1.618), which is generally believed to be aesthetically pleasing, by renaissance artists. In order to scientifically verify their results, they compared the scores to the ones from Hot-or-Not, a beauty ranking website. However useful this algorithm is, it sounds like a solution screaming for a problem. So, I’ll put on my businessman hat and try to think up a few creative ones.

The most obvious application for such an algorithm would definitely be in plastic surgery. Surgeons already use computer models to help patients visualise their future look and make any necessary corrections. Now, plug in this algorithm and they can even score a woman on how she will look after the surgery. The more artful surgeons may even base their surgery fees on the score, charging exorbitant amounts for a perfect 10.

An alternative application would be for industries where beauty is important, such as acting, modeling or even beauty pageants. Numbers are already important for these people, such as dress size, height and other measurements. So, tacking on an extra number would not be too difficult to do. Obviously, physical beauty isn’t everything, but this tool could be invaluable in helping to screen people out, if someone was diabolically ugly, for example.

Another possible application is for settling bar bets. No longer would guys have to argue about how hot a woman is. All they would need to do is take a photo and upload it to a computer that will spit out a score. This can even be done entirely by mobile phone these days. Ageless arguments can be settled for less than the price of a pint. This might just be the golden standard scale on which, all women in the world will be judged by in the future.

Which leads me to the ultimate application for such an algorithm. This tool would be terribly useful for teenage girls who are self absorbed in their own appearance. Instead of just reading the numbers off a bathroom scale and seeing how they look in a mirror, these girls can now stand in front of a webcam and have an objective score assigned by a computer. This would just do wonders in shaping their self esteem for adulthood.

I know that we boffins rarely get to see the sun, much less women, but this is plain pathetic. There’s not much use in knowing if someone is superficially hot. If they had designed an algorithm that could help other boffins get these hot women, that would be something that I’d take to the bank.

Alright, I know that this entry was a little ironic, but I won’t be surprised if they do really well in this superficial world that we live in, where everything is about appearances.

One thought on “Mathematical Beauty”